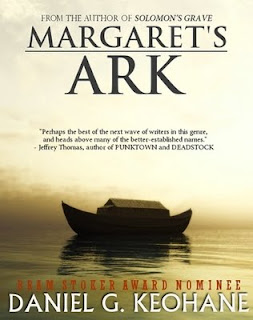 "A gripping story about the power of faith. This novel is the mark of an experienced craftsmen. The characters are varied and engaging... he does what spiritual fiction often fails at: focuses on the human element, how humans deal and grapple with the difficulty-and demands-of faith."  - Shroud Magazine Reviews

"I couldn't put this book down. Margaret's Ark is a scary look at what might end the world someday. Keohane has taken a different approach to the usual religious apocalypse stories. This is not the Rapture - this is a natural disaster that will change the world forever. "  - Sheri White, Terrorflicks.com

Available at Amazon, Barnes & Noble, and all major online retailers (or through special order for the moment, at any of the remaining brick &amp; mortar stores) 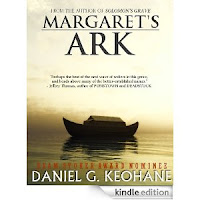 Kindle & Other eBook Editions:
Price: only $ 2.99
Kindle available at Amazon

On April ninth, thousands of people wake from the same dream, angels instructing them to build a biblical ark in their front yard, or the town square or little league field. Anywhere, to prepare for the worst natural disaster to strike the world since the days of Noah. A widowed California high school teacher risks everything to build a boat in the sixty days she is given. A homeless and self-proclaimed prophet of God preaches across Boston's waterfront, unaware that he is not alone in his visions. A young priest is torn between the signs around him and the skepticism of his Church.

In the end, only thirty people may board each boat. As the world slowly comes to grips with events unfolding around them, they must weigh their own faith in the exceptional and identical visions of so many people. The skies are clear, without a hint of rain. But if the dreams are true, something terrible is looming on the horizon.

Also, be sure to check out Daniel's debut release, Solomon's Grave, from Dragon Moon Press. Solomon's Grave was nominated for the Bram Stoker Award for Best First Novel of 2009. 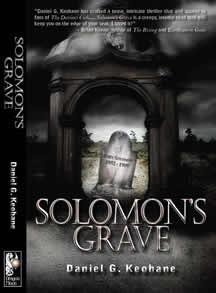 "...a dark, intricate Biblical thriller not fit for Sunday School, but more than adequate to while away the evenings in suspense. With a solid first effort, Keohane provokes thought and inspires dread, teaching an important lesson: Providence is often the most frightening thing a man can face.."
-- Shroud Magazine

"Daniel G. Keohane has crafted a tense, intricate thriller that will appeal to fans of The Davinci Code.... Solomon's Grave is a creepy, intense read that will keep you on the edge of your seat. I loved it!"
-- Brian Keene, author of The Rising and Castaways

Nathan Dinneck's new role as pastor may be shorter than he expects.


For thousands of years a secret has been hidden from the world and protected from those who covet its power. Popes and Kings have sought it. Theologians and historians have debated its very existence. In every generation since the days of Solomon, one person is chosen to keep its secret, protect it from an ageless group claiming the treasure for their own dark god. After millennia of searching, they are finally closing in on their prize.

Evil has followed Nathan home to Hillcrest, Massachusetts.
Nightmares of temples and blood sacrifice, visions of angels and cemeteries foreshadow a dark battle to come. In the balance hangs the lives and souls of those chosen to protect history's most holy relic, perhaps even the gateway to heaven itself.
Posted by Other Road Press at 1:03 PM